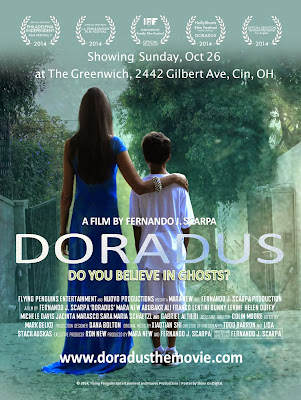 What was the original seed that developed in the story Doradus ?

Doradus was born one day of April 2013 when Mara New, producer and main star of the movie, invited me to a Saturday lunch in her house in the Hollywood Hills. I was sick that day, I wanted to cancel and stay home, but I also didin't want to say no to a master vegan cook as Mara. If you add that we are both from Milan, Italy, you'll understand why nothing stopped me to a good meal.

So I went. I entered the estate, and a series of images struck me. There was a piano, incredible captivating pieces of art at the walls, a terrace, and a stair going down. I had the story before Mara could even say hello to me. After lunch, I just told her about a writer who writes a script that needs some changes, "some very important changes", and she said... yes. Two hours later I was back home in bed.

When you chose a the name for story, Doradus, what did you want to conjure in the mind of the potential audience?

Stars of an unknown constellation. One you can only see with your subconscious mind, or else with a film camera.

On the panel of a major festival you were made a comparison between artistic story telling, writing for film and the way a grandmother may talk to a grandchild. Could you talk more about that?

I wonder how they keep inviting me. At panels a directors should talk about Bergman, Orson Welles, or Fellini and there I go and talk about grandmothers. Well, it goes like this. I broke the sugar jar when I was 5 yo, and I hated how my mom and dad tried hard to make me understand that it was wrong, applying logic and reason to their talking to me. I couldn't listen. I knew they were right, but I hated the experience of being patronized. So as a defense, ultimately I still didn't care about the broken jar. Till that evening my grandmother came to my bed and without any judgement told me the story of a kid in a city far away, about my same age, looking pretty close to me who had done something bad pretty much like I had done. She stopped. I couldn't restis. I asked, and then? Now, it's that question, 'and then?', that makes story so powerful. Story is a genetic print of human beings. A secret kept away from social life, till it's night and we run to a movie theater, to see how a character pretty much like us, in a place similar to ours, does something very close to what we all would do. And then? Then you watch the movie. Nobody beats a well told story.

Is this the first time that you have worked with Mara New on a film ? What was your foremost motivation for working with her ?

I just told you, the food. No, I'm kidding. Yes Doradus is the first project together. Mara is an incredible producer, an emotional force and a great support to a director. Plus, she is a gifted actress, I'm happy to have the opportunity to show the movie in Cincinnati. After that, Doradus screens on October 30th at the Chinese Theater in Hollywood and some other important festivals. For Doradus, Mara and I are planning on placing it as an episodic 30-min mystery drama for TV.

What plans do you have for future projects ?

We are close to start production of a comedy-drama called 'Jay'. Mara and I produce. In Jay, she plays the chief editor of a fashion magazine who has had many many husbands, and still looks for the next. I will play the Italian fashion designer Jay Rocco, and an incredible talented young man I discovered at an audition for a play here in Los Angeles, Phuc Cao, will play Matteo, a young man who allegedly is Jay's unknown son.