not straight out of no where ...

Are we being robbed again?
Is there undue hype for a lesser work?

Talking about "Straight Outta Compton" ...
I want to see the film.
NWA was not my favorite group, in fact when they came along I was listening to Public Enemy, Boogie Down Productions Eric B & Rakim and Stetsasonic,... so I was not at all impressed with the NWA style, beats, lyrics, flow...

Nothing about them impressed me at the time.

In hindsight I can see them as trailblazing, but I certainly never thought NWA was political.
Public Enemy and BDP were every bit as political. (Even more so really)

They were shocking.
Maybe for a lot of people - suburban white kids included (who weren't listening to Rap previously) - the shock value is what got NWA over more than anything.
I'm looking forward to seeing the film to see what I learn.
I know quite a bit. I lived through their rise to and effect on, pop culture.
Still I'm absolutely sure I'll learn a lot more about "The World's Most Dangerous Group".

But one of the things I'm most curious about is how much
the film will acknowledge (at least) 4 other albums (artists & careers)
that made "Straight Outta Compton" possible, but don't have major motion pictures made about them (YET).

After all "Straight Outta Compton" is not coming straight outta no where.
Even NWA owes credit to the foundation.

Here are 4 albums I know made the NWA debut possible.
Do you know these?
What other albums would you add to this list? 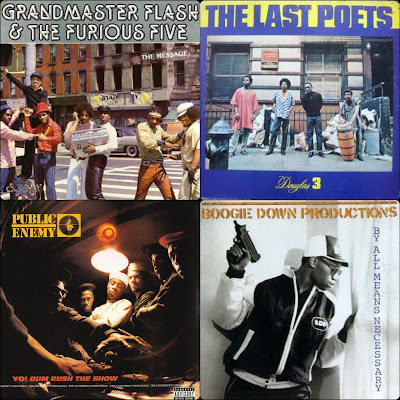 Lady Khadija said…
I was young but before NWA hit hard in Cali, but I remember hip hop culture was party music. We listened to PE, BDP, Kool Moe Dee, Erik B & Rakim, but mostly MC Hammer, LL Cool J, Heavy D, Father MC, Run DMC and the Fat Boys dominated the scence. The Message was HUGE but the culture was the party, even for the neighborhood dope boy. Older people were into Last Poets and Watts Prophets. NWA hit so hard in Oakland because they infused street life into the party culture and most young guys could relate. NWA was the culture of black and brown California neighborhoods, not so much because they glorified drugs and degraded women but simply because they said Fuck the Police. Keep in mind, NWA came at a time when the police were rounding up and killin black and brown boys. Crack had already devastated the black and brown communities. There was a perpetual APB out on black males 18-35 and all this was only to stamp out any residual of the black love and self determination that Black Panther Party built in the Bay Area. Not long after NWA hit the scene, Huey P. Newton was killed and that was all she wrote. Now, here we are all these years later and I can see, NWA did just was they were released to do, kill everything the black panter party had established.
August 13, 2015 at 7:58 AM

Unknown said…
The main thing I remember about when NWA came out was how they made it "OK" to do more harm to women. They rapped about doing atrocious things to the women in their lives (because they were actually doing them!) and we still see the effects of that today. A whole generation of young boys and men across the country picked up on their misogyny and ran with it.
August 13, 2015 at 8:11 AM