Mike : "Burnt Sugar is a collective of 22 members. Talk about the machinations of operating an ensemble of that size. The benefits? the complications?"

Jared : "Mike, actually the quote you’re referring to means to relay, it’s not surprising if and when we do have twenty-two members on stage. We’ve had from three to thirty-five members on stage and as one of the band’s motto’s state “while never playing the same thing once”.

"We have a saying in the band that if we can’t sit down and enjoy a glass of wine, a meal, and a conversation with you, we would prefer not to play music with you. You have to be open, generous, accustomed to call & response and making split-second, real time musical decisions to play in a band that can, at the flip of a hand or baton gesture, go strictly improvisational. I have witnessed on numerous occasions the joy the band brings by providing unexpected emotional release with our conducted improvisations; like a movie that has a turn of events you weren’t expecting and now you are more engaged and excited as to what might occur next … Burnt Sugar Arkestra performances have provided the same effect largely due to the “in-tune-ness” of it’s players."

"The complications revolve around convincing presenters and promoters around the globe to pay, transport, feed and house such a large band as since our inception in 1999 the global economy has only witnessed funds for artistic endeavors evaporate. Mike, a sign of the times have art museums & galleries, like your Warhol Museum, willing to book large musical acts these days more often than the “usual suspect” musical venues. It’s a brilliant concept actually where museum curators have identified they have a fixed presentation, accented with traveling exhibits from time to time; so how do we keep our usual patrons returning while also attracting new devotees … let’s put on high quality and adventurous musical performances … a win/win for performers and the public." 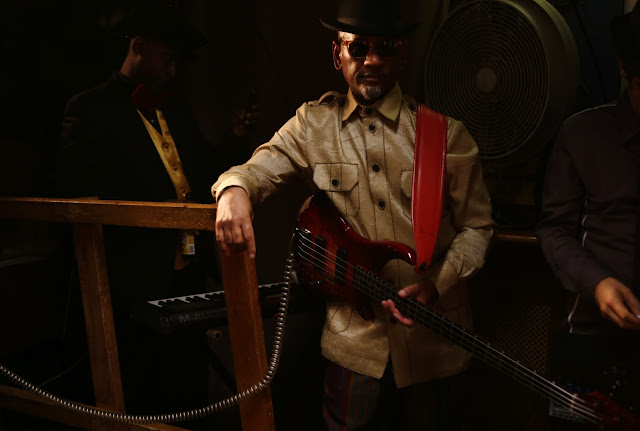 "What the club scene was during my teens in the sixties to even the NYC heyday starting with Max’s Kansas City and continuing in the Eighties with The Peppermint Lounge, Danceteria, CBGBs, Maxwells in Hoboken N.J., and The World has completely disappeared; as a large group you are more likely to string together festival dates as opposed to club dates these days; phrases like "hitting on the chitlin circuit” are just not financially feasible when you consider lodging, transportation, hospitality and then performers’ road salaries. I mean twenty-first century events have folks playing in their living rooms with a borderless paid audience attending through streaming web sites."

"As far as keeping the band happy, we’ve solved that … we’re not in the business of keeping the band happy … the band has to keep themselves happy and if a particular individual is unhappy … they are welcomed to move on. There are no permanent members or even an "identifiable face or sound” within the Burnt Sugar Arkestra. Other than Greg and I, as Co-Organizers of our business entity Burnt Sugar Index LLC, everyone else is an independent contractor. If they are busy, on vacation, not excited by the terms for an offered performance … they have the option to say “no thank you, I’ll pass”. Folks have come aboard the good ship sugar and quickly left after realizing their talent didn’t lead to special considerations and privileges. All of this has made my job easier as I can focus on making the folks who want to be here as comfortable as possible so all they have to concern themselves with is providing a wonderful performance and enjoying each others’ company."

"It also helps that most everyone in the Burnt Sugar Arkestra is also a bandleader and are fully aware of the complications surrounding supporting and maintaining a working unit. I like to say, if you want really good band members, find folks who’ve been or are band leaders.”

"Although at the time I was angry to of been snatched out of the Dayton Ohio funk scene to attend Notre Dame in the early seventies, I was determined to continue playing. Not wanting to waste my four years in college, I decided on a business major. Mike now looking back … those four years were crucial to what I’m able to provide the Burnt Sugar Arkestra today.

As Damon Dash recently stated … to paraphrase … to leave your own legacy you have to work for yourself; you have to be the boss and construct your own imprint. No matter how brilliant you are, if you’re working for someone else your brilliance can be true, but it will inevitably be your boss(es) who’ll shine; yes … in exchange for that brilliance many folks are handsomely compensated (or not), but at the end of the day and when history books make note, it will be your bosses' name that becomes legend off of your back; with the Burnt Sugar Arkestra, from the very beginning, Greg Tate and I have devised, manipulated and controlled all the musical, conceptual and financial decisions & details which has led to world travels, releasing fifteen recordings and paying independent contractors thousands of dollars … we are both very very proud of that."

Mike : ""More Than Post-Human" is described on your website as your version of what R&B might sound like today if live bands hadn't been derailed by sampling technology somewhere around 1977. Now, another data point I have is Questlove's discussion about the Stevie Wonder episode on the Cosby Show in 1986, in which Theo's voice is instantly sampled by Stevie and inserted in a song. The little Casio keyboard came out shortly thereafter, and gave every kid those capabilities. Do you see a recovery in musician-focused music?"

Jared : “First off a shout out to Rap & Hip Hop as I think we’ve all marveled at the transformation of the turntable from sound replicator to music maker and that revelation was a musical development; cats in the subway beating on plastic tubs and car rims keep the connective tissue from the very beginning and with the voice most likely being the first musical instrument who can deny the merit of a forty-four word stream over four bars of 4/4 … of course it’s been noted history is what the writers of history make it … but I think be it a yodel, thigh slap or Casio keyboard, musician-focused music has never left nor will it."


Mike : "I found it very refreshing that you said you don't own a cellphone? Is it a revolt?"

Jared : "I have no idea … I mean … I do have a first-generation I-touch. I’m a big fan of letting my brain shut down and idle here and there and to do that there has to be extended moments of peace & quiet and no outside input. Not having a cell phone allows me more of those moments. It also defines my availability … folks who’ve known me for thirty years-plus know I’ve had the same phone number; that that number is connected to a land-line and a message machine and that that’s all there is … there’s simplicity in that arrangement regarding contacting and staying in touch with me.”


Mike : "Greg Tate was a Village Voice staff writer, an Ivy League lecturer, an author, and an interviewer of musical royalty. You have a business degree from Notre Dame, you studied at the NE Conservatory of Music. How did you two meet and decide to collaborate?"

Jared : “Mike we also have a Dayton Ohio connection as Greg was born there and I grew up there ( Jared was born in Cleveland Ohio.). We initially met during the formative days of the Black Rock Coalition where Greg was one of the founders along with Konda Mason and Vernon Reid, while I came aboard as the first Director of Operations. Our Burnt Sugar Arkestra collaboration was sparked by a mutual good friend, Jimmy Lee. Greg described to Jimmy the sound he envisioned for a new project and asked who would he suggest to bring that to life. Jimmy suggested me on bass. The very first inception of Burnt Sugar contained Vijay Iyer, Trevor Holder (drums), Simmie (violin), Michael Morgan Craft and Ronny Drayton (guitars), and Bruce Mack (synth). The inside photo of our first release “Blood on the Leaf” has a pic from one of the first CBGB Underground performances. “Blood” was made possible thanks to much love from Bill Bragin and a grant from Arts International; with that Greg and I were able to establish our business entity and announce Burnt Sugar the Arkestra Chamber to the world-wide musical community with four releases in our first two years of existence … the aforementioned “Blood On The Leaf” and the three-disc set “That Depends On What You Know” (to be re-release as vinyl next year) and we were on our way.


Mike : "You've been on Conan and Letterman, you've written for Charlie Musselwhite, and you've played with The Roots, Bernie Worrell, Vernon Reid and others. Your own project is esoteric and far-reaching. What is closest to your ideal expression?"

Jared : "During my time in Boston, I left NEC after two years and stared my professional music career with a band entitled … are you ready for it … Hypertension. We coined a saying “Music for your Head & Feet, Delivered on that Funky Beat”. That kind of describes my ideal expression as initially being trained in piano, then classical percussion and marching band drums, all before I picked up a bass; which in my mind is the connective tissue between rhythm and harmony in most popular music. There will always be an element of melodic movement and rhythm in my playing with the “ideal” effect being when someone hears my playing they later find themselves humming one of my bass lines while noticing there’s also a little extra pep in their step."


Mike : ""All Ya Needs That Negrocity" has been portrayed as some of your most accessible work. Do you agree?"

Jared : "I actually think that’s a statement that could be directed towards five or six of our recordings all depending on the listeners palette … that’s the beauty of the Burnt Sugar Arkestra recordings. But to answer your question I think our latest “The Darknuss” by our avant funk & roll splinter cell Rebellum contains note-worthy wordplay and adventuresome melodies that could be played on pop radio today."

Jared : "I have to say the breadth and depth of American music, highlighting Duke Ellington, Aaron Copland, Sun Ra, Parliament Funkadelic and The Art Ensemble of Chicago with Lawrence D. "Butch" Morris’s “Conduction” system as the connective tissue.

Jared : “ … and Sly, Joni Mitchell, Muscle Shoals Rhythm Section, JB, Led Zep, Betty Davis, Bowie, Maxayn, Little Feat, Sun Ra and WAR to add to the endless influences we as devotees to all forms of music would attest to.