Quotes from "What is the What"

My hope is that these lines will cause a few more people to purchase & read this powerful book ..

-- page 157 --
"... Everyone was weak, far too weak to think clearly when we needed to react to dangers. We were nearly naked, having traded our clothes for food in villages along the way, and most of us were barefoot.
Why would we be of interest to a high-altitude bomber?
When I saw it, all of the boys saw it. Three hundred heads turned upward at once. The sound was not at first different from the sound of a supply plane, or one of the small aircraft that occasionally moved through the sky. But the sound rumbled deeper in my skin, and the plane was bigger than any I could remember seeing so high.
The plane passed once over us and disappeared, and we continued to walk. When helicopter gunships would come our way, we were told to hide in trees, in the brush, but with the Antonovs the only stated rule was to remove or hide anything that might reflect the sun. Mirrors, glass, anything that could catch the light, all were banned. But those items were long gone, and few boys, of course, had had anything like that in the first place. So we walked, not imagining that we would be made a target. We were hundreds of near-naked boys, all unarmed and most under twelve years old. Why would this plane take interest in us?
But the plane returned a few minutes later, and soon after, there was a whistle, Dut screamed to us that we needed to run but did not tell us where. We ran in a hundred different directions and two boys chose the wrong direction. ..." 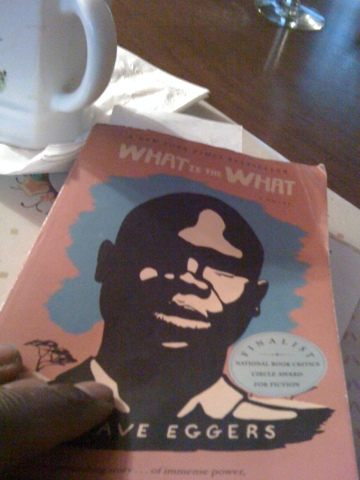