SON: Daddy somethings out there...

Just finish your work so we can leave in a hurry

SON: I kinda wanna see it seems so exciting

showed up for the fun and then it just ate you

SON: it couldn't it wouldn't, quickly I'd stop it

take all my muscles & karate chop it

FATHER: all that single handed ?

FATHER: don't take it for granted

son learn how to move when dangers approaching

I fight for you now but later I'm coaching

eventually when you get the hang of things

the fight is all yours I'm leave the ring

SON: ahhh for real .. well where you gone be at

FATHER: come on son what you be on ?

I'm going to the beyond

spit on and peed on

so I can see the Nirvana

protecting my soul with the armor of honor

FATHER: I know let's go, I think its one of my friends 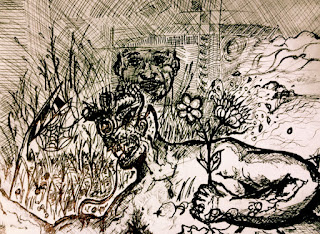