we are proud to welcome Graham Haynes to Cincinnati, May 23rd 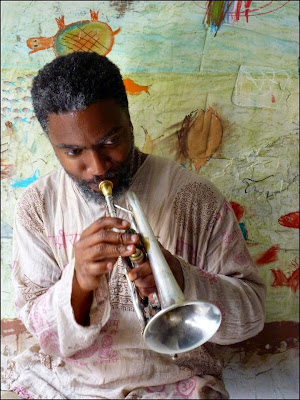 Regarded as an innovator on cornet and flugelhorn, an extraordinary composer, and an emerging force in contemporary electronic music and world music, Graham Haynes has redefined and deconstructed that genre we still call "jazz".

Graham Haynes was born in 1960 and raised in Hollis , Queens , NY.
He is the son of jazz legend Roy Haynes .
His two years at Queens College (1978-1980) studying composition, harmony and theory spurred his interest in classical and electronic music (Robert Moog was professor of electronic music at the time). Haynes became a disciplined student , studying privately with Gillespie alumnus Dave Burns while playing in the Pentecostal church.
In1979 he met alto saxophonist Steve Coleman. They formed a band called Five Elements, which launched the M-Base collective, an influential group of NY improvisers. Haynes spent much of the 1980's collaborating with Coleman and Cassandra Wilson. In the late 1980's he formed his own ensemble, Graham Haynes and No Image, and was a mainstay of the New York downtown music scene of that time. In 1989 he recorded his first album as a leader, What Time It Be ?

During the late 1980's Haynes immersed himself in a wide range of African, Arabic and South Asian music which prompted his move to Paris in 1990. There he recorded Nocturne Parisienne and The Griots Footsteps, for French Polygram records.

Haynes spent the next three years studying and performing with masters of African and Asian music, occasionally returning to NY to work with artists such as Ed Blackwell, George Russell, Uri Cain and David Murray among others. In 1993, Haynes moved back to New York City, where he began investigating sampling and hip hop music. The album Transition came out of this investigation. His next project, Tones for The Twenty-First Century, combined sound effects, textures, drones, and samples , layered over Haynes electronically manipulated horn.

Since 2000 Haynes worked as composer and music director on the following multimedia projects:

in 2003 Haynes composed score for Flag Wars, a film funded by PBS. During 2004-2005 he composed and produced original soundtrack for the film The Promise by Maria Norman.

Throughout his musical career Graham Haynes has brought together different musical traditions from Africa , Asia and Arabic countries. He has been a perennial guest at the Gnawa Trance Music Festival in Morocco.

Graham Haynes has recorded fifteen critically acclaimed CD's as a leader and countless CD's as a side person with such artists as Steve Coleman, Roy Haynes, Ed Blackwell, Abbey Lincoln, Cassandra Wilson .
Since 2013 Haynes has been a member of the Vijay Iyer Sextet.
Graham tours annually in Europe, Asia, and Africa and has appeared several times on national tv. He is in high professional demand as a musical director and composer for film, theatre, dance and multimedia .


In 2003 Graham lectured at New York University on the subject of Music and Trance .

2010 Taught as adjunct professor The New School for Jazz and Contemporary Music .